It was created approximately 1100 years ago and presently approximately 300 000000 people are using it. Actually Bulgaria is one of the few countries in the world that have created their own alphabets. That is why almost 100 % of the sounds in the modern Bulgarian language have their own sign and basically you always read what you write and vice versa. See how Cyrillic alphabet is distributed around the world:

Though named after the two saints – Cyril and Methodius, it is actually completely different from what they have created – their alphabet was named Glagolitza and looks quite different. The Glagolitza was created after an order by the Emperor of Constantinople, while the Cyrillic Alphabet was created by the order of the Bulgarian Tzar – Simeon I The Great. See the difference here: 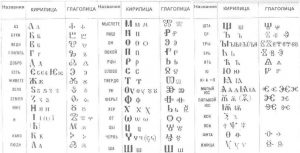 Take a free online test in Bulgarian and see how well you know one of the oldest European languages.

Get 50 BGN discount on a Bulgarian course starting in June 2016 at ACCENT Language School. You can choose from Beginner’s module or a Conversation class.

On 24 May Bulgaria celebrates the creation of the Cyrillic alphabet